You Can’t Sit With Us

I tell ya, sometimes I have crap luck.

For instance, my hotel kicked me out.

Okay, so maybe it wasn’t that dramatic. But it basically was.

Due to me having two different bookings at the hotel, I had to change rooms halfway through the week. Not a problem, whatsoever. I’ll just check out, go run some errands, check back in at 3pm, get ready, head off to Sziget that night.

I went to check back in, and the receptionist gave me the news: they’ve overbooked, and they’re booting me. 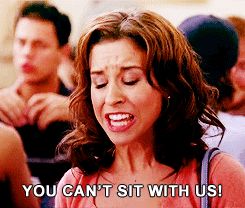 I was a little stunned, to be honest. The effort of moving hotels seemed like more energy than I could muster. Luckily for me, they had a sister hotel 10 minutes away that had availability. However, I wasn’t going to leave that easily. I wanted compensation for my inconvenience. A 20% discount and a taxi later, I was settled into my new hotel.

So a bit of a backfire, but everything was ok. I wasn’t homeless.

Then misfortune #2 came along.

When I went to have my ticket scanned at Sziget, the woman said I needed to go to the Problematic Ticket booth. “Ahhh, ok” I thought. That doesn’t sound like great news.

I walked over to the booth, and a guy scanned my ticket and went, “Huh. Oh.”

Not what you want to hear.

Come to find out, I didn’t actually buy tickets from a reliable seller, but from a resale website. I had no idea. I just used the website based on a recommendation. Well turns out, two of the three tickets I bought were originally purchased with stolen credit cards.

So I had to buy new tickets and will need to file a complaint on this Sketchy McSketchster website. So that’s something to look forward to.

However. It all worked out in the end. I got into Sziget, I watched The Chainsmokers perform (he definitely lip syncs. Like no doubt. But still really enjoyable), and I made it back to my new hotel.

Sometimes things feel really dramatic. But at the end of the day, you have to remember that everything is actually perfectly fine.

Being on Shoulders Is the Best

I Met a Guy From Dallas and Cried

The Best View in Edinburgh

Goodbye Melbourne. Or Should I Say See You Later …

Biking Through the Streets of Valencia